Occupy Wall Street is Not the Way to Conscious Capitalism

It was only a matter of time before the young revolutionaries converged in their Occupy Wall Street uprising in reaction to Casino Capitalism and in the name of Conscious Capitalism.  It’s an understandable reaction to the system that has disappointed and failed us all except those few who have benefited from it.

But let’s not forget that the system has no life of its own without the individuals who are inside the system.  It’s people who make the choices, who take the actions.  It’s people who’ve “not sought consent to extract wealth from others and the earth”.  It is human minds that have given in to greed and “put profit over people, self-interest over justice and oppression over equality.”

The pain, worry, fear and anger that the youth of America (and we all across the world) are feeling is understandable.  But going into reaction and blame is not the solution.  Going into reaction keeps you at the same level of consciousness at which the problem resides.  Ultimately, you only serve to set off a chain reaction  and perpetuate the problem. 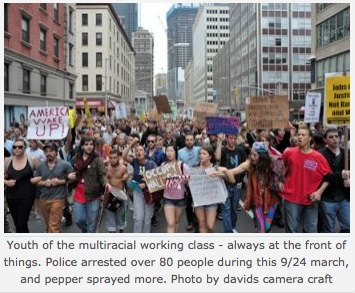 Let’s take the current situation to one of its many possible (but highly likely) conclusions.  Do you really think that the Wall Street tycoons and the greedy CEOs are at all perturbed by the reactions of the Occupy Wall Street movement?  They may make the right noises, they may even comment in public and in the media about how things need to change.  But privately, in the inner recesses of their minds, their greed endures.  They will not give up their mentality of me-vs-you, ‘if I have then you have not’.  They will not give it up because that is the level of their consciousness.  That is the level of many of us in our consciousness.  And it is the kind of consciousness that has resulted in the current flavour of capitalism which a zero-sum game where if I win, you lose.  Current capitalism states that the pie is only so big, and I, though my greed and power, want and can have more of it, and tough luck to you.

Reacting to this to try to change it does not really change things.  Revolutions bring about a new order, but they do not bring about a new level of consciousness.  Einstein really got it all those years ago when he said that problems cannot be solved at the same level of consciousness that created them.  Occupy Wall Street, if it does serve to overthrow the current system of capitalism, will simply create a new reality to be overthrown again by something or someone else in the future who is more powerful.

Do we really want to continue in this unconscious way?

So what is the solution?

We need to evolve the leaders of capitalism.  These leaders need to shift outside of their ego/identity that drives them to take unconscious actions for their own survival and put themselves first at the expense of all others and all else.  This is not a blame statement.  Blaming them won’t change them.  This is a statement of human nature and insight about it.  We all do it, just that those in leadership positions do it with more power and more money.

The solution is to SEE our fear-based, survivalist-driven identities in action and, when we see this, we see that we have other choices to act and create business and wealth outside of our habitual me-first human conditioning.  We can truly serve the ethos of conscious capitalism which is about creating wealth for ourselves and others, while making the world a better place at the same time.

And the revolutionaries?  You’re serving a great purpose in rising up.  We applaud you.  But you need to serve this purpose wisely and consciously.  Move out of a blame mindset.  Get out of making ‘them’ wrong and making yourselves right.  Look at the facts for what they are.  Point them out.  But don’t go into reaction about them.  Look to how you can contribute and take responsibility for what you want to see in world (to quote Ghandi’s Be the change you want to see in the world), not fling the same amounts of blame and aggression towards the capitalists which you accuse them of.  Are you being as collaborative, generous and inclusive – right there, in your everyday lives – as you are wanting the Wall Street moguls to be? If you are, then you are living the changes you want to see in others.  Right there you are at your maximum power to effect change.  The mindset that’s required is not one of taking away (thereby perpetuating the separation that already exists).  The mindset that’s needed is about evolution, about inclusion, about true collaboration in order to evolve us to the next level of business consciousness and a world in which we can all share the profits.