The Coordinates of A Conscious Leader

In exploring what a Conscious Leader leading in a Conscious Business pursuing Conscious Capitalism actually means, the views are ever-evolving and building on one another to form a clearer picture that will light the way for leaders drawn to pursuing this path.

This paper describes a perspective on where a Conscious Leader lies in comparison to a traditional leader, aimed at making the territory clearer.  (.pdf available for download here). 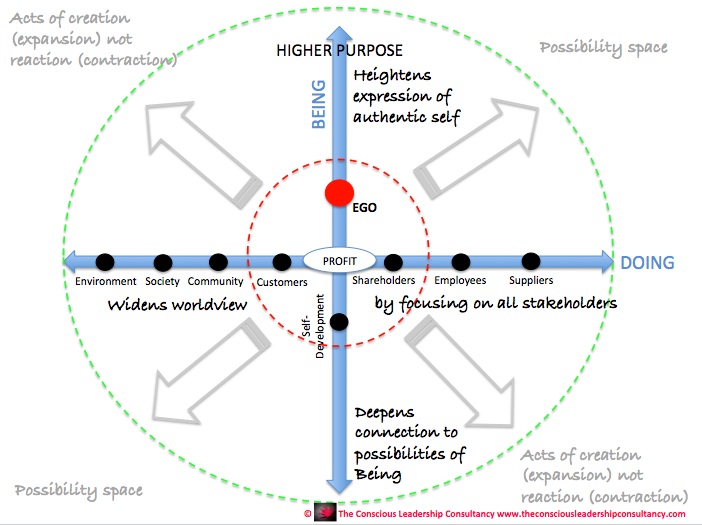 Conscious Leadership can be viewed along two axes:

X – axis: The axis of DOING, comprised of what the leader focuses on every day, how far his* worldview extends.

Y – axis: The axis of BEING, comprising who the leader is being in his role.  Being determines mindset, behaviour and way of interacting with others.

These two axes INTERSECT at the point of PROFIT.  Without profit, the business cannot exist.

The dotted red line denotes the traditional field of focus for leaders in a capitalist system: a focus on PROFIT and the SHAREHOLDERS to the business as being of primary importance.  All other stakeholders are secondary.

The extent of the leader’s ‘field of effect’ if governed by his EGO or IDENTITY.  Ego is the point around which all of us are contracted.  It represents our beliefs, our values and our conditioned patterns.  It also represents everything we think of as ‘mine’: my job, my house, my wife, my name – and everything we think of as ‘me’: I am a leader, I am a male, I am successful (or I am not), I work for XYZ company. It is the illusion of who we think we are, and when we are not able to see outside of this illusion we are subject to being governed by its conditioned patterns, thereby living and leading UNCONSCIOUSLY.

Pursuing PROFIT and POWER fits in very well with the nature of the ego-driven leader.  By securing profit and power at all costs, the leader gets to maintain the illusion of his own ego.

This becomes obviously limiting when one is able to extend one’s perspective to see beyond the context of the ego-driven leader.  Much more is available than the ego can see, namely the potential to act into a field of possibilities (as reported by modern day science via quantum physics) without the illusionary boundaries (mindset, beliefs, reactions) of the ego.  This field of possibilities is less accessible to the ego-full leader because he is too concerned about maintaining his position and his security.  He suffers from a mindset of SCARCITY rather than ABUNDANCE.

Even where traditional leaders may engage in SELF-DEVELOPMENT via traditional coaching, leadership programmes, the development of EQ and other forms of personal development and knowledge development, the EGO still rules.  Without becoming aware of one’s own ego and seeing its influence on our lives, and its inherently illusionary nature, the leader is limited to only ever going so far in his personal development.  At best, he can expect to understand more and more about his own STORY.  However, our story about ourselves, our life, what made us who we are, what our beliefs and patterns are, can only take us so far – to the outer limits of our own story.  It cannot take us beyond this.  To go beyond our own story we need to notice the illusion that the story is.  Our story is founded on our ego’s or identity’s patterns and responses – and, ultimately, our identity is not who we are.

At this point, in recognising this, the leader has the potential to step outside of his ego.  He becomes able to occupy a vantage point outside of his conditioned patterns and unconscious behaviour, observing it rather than having a perspective only from within it.  When the ego or identity is recognised for what it is, an illusion, the leader gains access to the field of being beyond ego.

At this point, the leader has entered into the field of the CONSCIOUS LEADER.  This is depicted by the placement of the green dotted line.  This is not to say that this green line represents the outer limits of the Conscious Leader.  Rather, it is meant to imply that anything outside of the red line depicting the ego enters into the field of the Conscious Leader.

He enters into a field of possibility where he is in creation much more than he is in reaction, and where DEEPENING his connection with his self and HEIGHTENING the expression of his authentic self becomes ever more possible.

Because the Conscious Leader is freer from the conditioned patterns and limitations of his ego, he is able to act less from fear and more in SERVICE OF THE GREATER WHOLE.  In Conscious Capitalism terms, this means acting for the GREATER SYSTEM of which the business is part.  Rather than relying on a focus on profit and shareholders as a way of maintaining security, the Conscious Leader is able to be far more abundant, extending his focus, widening his worldview and focusing on all stakeholders.  In Conscious Business terms, these include the employees, the suppliers, the community of which the business forms part, society, and the environment.

As practised in Conscious Capitalism, profit is still important.  However, it is not pursued at the expense of everything and everyone else connected to the business.  The Conscious Leader strives to maximize the benefits and coordinates the needs of all the stakeholders in the business, keeping his perspective wide and inclusive.

Conscious Leadership depicts a move from ‘me’ to ‘we’.  It requires one to move beyond one’s ego or identity so that one can act for the whole that is greater than oneself, the whole to which one and one’s business is connected.  The deepened BEING of the Conscious Leader enables him to connect with a HIGHER PURPOSE that is greater than profit alone.  Connecting to this higher purpose provides an energetic alignment for everyone connected to the business – and the Conscious Leader’s role is to coordinate this connection while ensuring that the business is run in an operationally sound manner as well.  Research indicates an increase of over nine times more profit in businesses run in this way and far more sustainability during tough times.

In terms of the coordinates of the Unconscious Leader, therefore, these can be seen to be located squarely within the red circle, wherever that leader’s ego might be placed.  The coordinates of the CONSCIOUS LEADER, on the other hand, exist anywhere outside of this area towards the green circle, with the possibility of expanding ever outwards into the space of possibility.  This represents a new way of leading and of doing business.